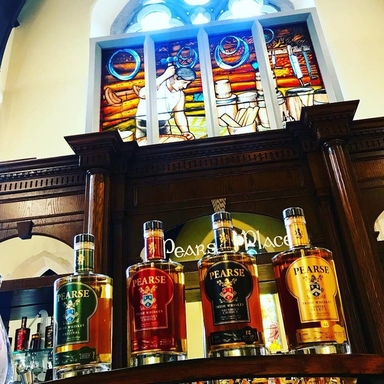 In the last two years the name Pearse Irish Whiskey has burst onto the Irish Whiskey scene to become one of the most recognised new entries on the market. Founded by Dr. Pearse Lyons, the company has surprised most new entrants in the market by launching out of nowhere with their own spirit! Of course to those who knew Pearse Lyons, that comes as no surprise. A man who had a PhD in yeast and fermentation, he founded Alltech, which has a massive presence in the world of animal feed, crops, brewing and distilling. The company also owns Town Branch Bourbon along with a brewery in Lexington which immediately gave Pearse Irish Whiskey the edge. With access to cultivated yeast strains not commonly available to the brewing and distilling world, expertise already in Brewing and distilling and access to some fantastically fresh ex bourbon casks from Town Branch, they really did start out on top.

In 2012, unknown to a lot at the time, Pearse Irish Whiskey started distilling in Carlow while they waited for their eventual home to be renovated. This home finally came to fruition in St James Church in Dublin where the very stills that operated in Carlow, now sit on the altar of the deconsecrated church. We’ll cover the tour in a later blog, but it is highly recommended even if just to see the fantastic work ethos that was employed by the Lyons family while renovating the church building and its grounds. No expense was spared in the work carried out to make it the fantastic attraction that it is.

At present the core range features four whiskeys; The Original, Founders Choice, Cooper’s Select and Distiller’s Choice, however, there is a new release coming real soon and it’s a smashing drop if I do say so myself. For today’s review we are going to start at the beginning and have a go at “The Original”.

I’m an instant fan of the labels used in these bottles. In a word, they are just class. The Lyons coat of arms, the Lion on the neck and the general layout oozes class. The Original is a blended whiskey aged in both ex bourbon cask and a very special cask. Remember we mentioned Alltech owned a Brewery in Lexington Kentucky? Well this brewery have a stout which was aged in ex bourbon barrels called Kentucky Bourbon Barrel Stout (much like the Caskmates initiate from Jameson). Once finished with, these casks were sent to Ireland and used to age some of the Pearse whiskey distilled in Carlow. The blend itself is made up of 3-5 year old malt and grain with the grain coming from Cooley and the malt being solely from the Pearse stills. I’m told it is a 36% malt to 64% grain blend. I’m tasting Batch 001 which is bottled at 42% ABV. and is a non age statement (NAS) whiskey. Colour is a shade of a dark white wine. It should also be noted that all bottlings from Pearse Irish Whiskey are free from artificial colouring and it is part of their plan going forward to keep it that way. This all stems from Pearse himself and Alltech’s tagline; “….Naturally”. And so, onto my thoughts.

Nose – Very light pleasant nose. Very floral and delicate. Slight note of smoke which must be coming from the stout casks as it is an unpeated malt. Little bit of malty taste and some green apple peals. Lemon in there too.

Palate – As you’d expect from the nose, the palate is very light and smooth and delicate. Vanilla, white chocolate and again some malt coming through. Anybody remember Whoppa bars? They were 5 pence sweet bars? Well this reminds me of the spearmint version of those, albeit a toned down version!

Finish – Slight tingle on the tongue but the finish is short. Bit of an oak hit before it disappeared.

Overall – For a 3-5 year old whiskey, this is smashing. This is the kind of light enjoyable whiskey that I would love to sip while sitting outside on a sunny day. I don’t very often use refreshing in reference to whiskey but this really is. For about €45 its a very very decent easy going whiskey. Glad they went with the 42% ABV. too, any lower and I don’t think it would have worked.

Keep an eye on the blog for reviews of more Pearse Irish Whiskey in the next while as we build up to their new release. We may even have a little surprise for readers!

On March 8th 2018 it was with great sadness that we learned of the untimely passing of Dr. Lyons. The man can only be described as a visionary. The first Irishman to receive a formal degree in distillation, he possessed a massive energy and positivity towards the Irish whiskey revival. When referring to the distillery in Dublin, he is quoted as having said “the legacy I would like to leave is, we made a difference. Its not about making money; its about making a difference”. And all you have to do is see the legacy he has left in St James’s to realise what exactly he meant. This is a legacy that will no doubt be carried on by his Wife Deirdre, Son Mark and Daughter Aoife whom are all involved in the Alltech company. Sláinte Pearse……

NOTE – This sample was provided by Pearse Irish Whiskey free of charge to the author. No monetary reward was received for the review. The review, as with all reviews, was written subjectively and not influenced in anyway.