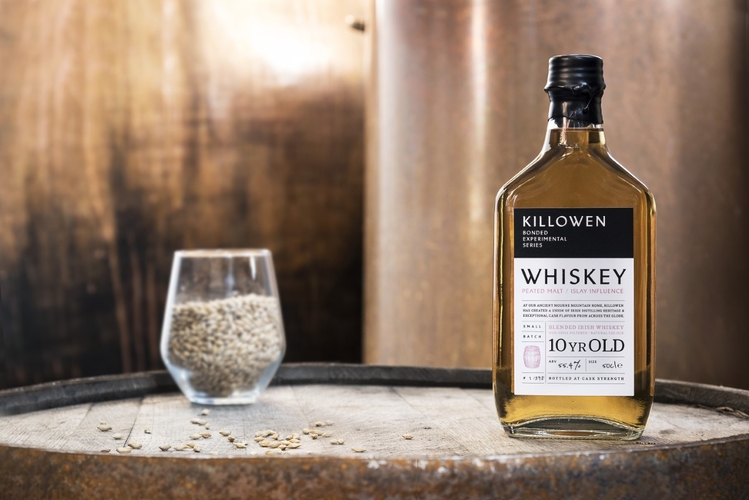 Peat is back baby!! While Connemara has been a staple of Irish Peated Whiskey for many’s the year, those who are new to peated whiskey can find it over powering. The fact that we had only one real peated whiskey bottling in Ireland for decades, coupled with the fallacy that peated whiskey is “scotch”, has lead to people shying away from the category altogether. With the arrival of Bill Phil last year, that changed dramatically! We saw avid non peated whiskey drinkers converted. In turn it lead to another hit, the Dark Silkie from Sliabh Liag. Yet another approachable peated whiskey. This morning, we learn of another lightly peated expression, Killowen’s 4th bottling in the Bonded Experimental Series, the 10 year old Peated Islay Cask.

The Bonded Experimental Series is a collection of sourced whiskeys which Killowen blend and then finish in casks from all over the world in an effort to create something different. I guess it’s their way of creating income until their own spirit comes of age. With full transparency on the label, the series has so far been a hit with whiskey drinkers and collectors alike. If you’re really lucky, you can even find cask char in your bottle signaling absolutely no filtering before bottling!

The Series has seen three great, heavily influenced finishes over the last while. Speaking this morning to Brendan Carthy, Founder and distiller at Killowen, he tells me that this release “opts for only a little smokiness and peat, mainly on the late palate and finish. At Killowen we understand that many whiskey drinkers prefer not to drink peated whiskeys and have therefore, this expression offers just a small peated kiss that will satisfy ‘peat heads’ while welcoming those ‘Non-Peat-Heads’ into the fold. The biggest challenge with this range is maintaining the very high standard of previous releases while making a very different expression. Thankfully the same successful and unique Killowen blend has been introduced to a very different cask and created another top class expression.“

Personally, I am a big fan of peated whiskey and appreciate both the slight kiss of peat right up to the big bold slap in the face with a sod of turf that is Octomore. It’s great to see distilleries and bottlers making that leap of faith in an effort to bring peat back into the Irish Whiskey category. As the saying goes, don’t knock it until you have tried it.

The Killowen 10 year old Peated Islay Cask is a release of only 398 500ml bottles bottled at 55.4% Cask Strength. It is available now from IrishMalts.

Nose – A Gentle sea breeze on the nose, with slight notes of cereal and lemon travel sweets, some ripe pear and fig with a subtle vanilla spice

Palate – A combination of apricot and orchard fruits, slight petroleum with rubber on one hand with a marriage of demerara sugar, cinnamon and clove on the other. 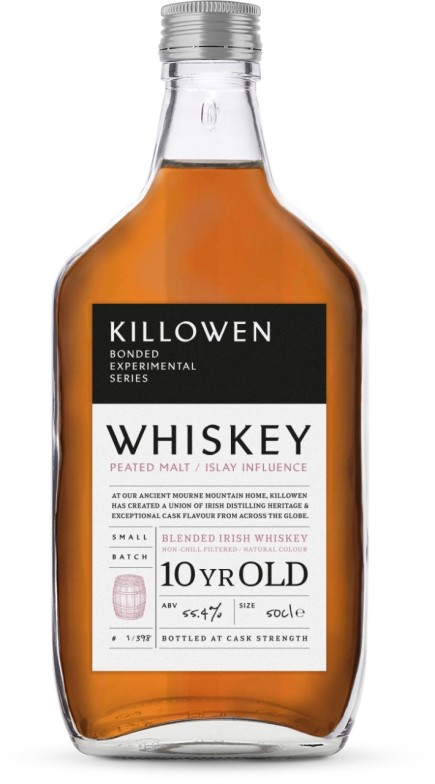