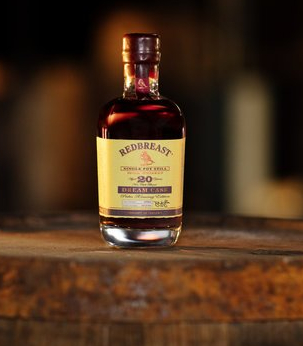 In April 2017 I was involved in a fantastic online tasting of what was then, a 31 year old Redbreast. A 100ml sample was sent to those of us who successfully applied to take part and that night I tasted what was the single best whiskey I had…….up to that point. At the end of the online video, Billy Leighton suggested we should lobby IDL marketing to launch the rest of the cask. And lobby we did. Fast forward one year to 2018 and we saw the release of the 32 year old Redbreast Dream Cask via The Birdhouse. I reviewed it here and to date, it is one of the most spectacular whiskeys I have ever had.

When the Dream Cask launched last year, it sold out in 6 hours. Over 800 bottles all snapped up and no doubt, if there was more they too would have sold. Did we really expect that it would be a one time show? I didn’t and I knew it would have to be different as there really can’t be another Dream Cask like we tried before. It wouldn’t be a Dream Cask if it was the same as the 32 year old! So as we eagerly awaited World Whisky Day (WWD), the day that both the original 31 and the subsequent 32 were announced, we all knew that something would appear. The fact that there would be another Dream Cask release was this years worst kept secret. The make up of it however, was a closely guarded secret. On the Wednesday before WWD, a little care package arrived, It was a 100ml sample of the latest Dream Cask. A Pedro Ximenéx infulence Single Pot Still. A first for Midleton who is famous for using Oloroso casks rather than PX. Bottled at 52.2% and with only 924 bottles, it was bound to pique our interest. So what’s the make up of this Dream Cask? Four unique casks ranging from 20 years old to 33 years old. Cask 2, 3 and 4 were originally destined for Redbreast 21 so you can imagine the quality of those. The cask make up is as follows;

The liquid from these casks were then vatted together and re casked back into the PX cask for a finishing period (I wonder where the remaining liquid went????). What resulted from this marriage of casks was a unique whiskey unlike any Redbreast we have tried before.

Finish – Long and lingering. Lovely clove spice. The Redbreast berry finish is there but with a nuttiness and sweetness from both sherry casks.

Overall – Different. And when I’ve said that to people the expect it is a let down. It’s not a let down. Not by any shade of the imagination. It is a Redbreast like no other and its simply yum. It gives your palate something new while still giving you a Redbreast experience that we all know and love. Is it as good as the 32 year old? No, of course it’s not. Is it a dam good dram? Yes. Is it worth €380? Hell yes it is. It’s a unique Redbreast that is priced on par with the usual Redbreast Single Casks. It is also priced within the realm of people actually buying one to open (I know, shock horror!!). Unfortunately I must predict that I reckon the website will crash and that certain people will buy multiples just to spin a profit. So, as this piece goes live on the same day as the Dream Cask PX Edition goes on sale,  if you intend on buying one for the purpose of drinking, I wish you well and truly hope you get one and enjoy it as much as I have. 3pm Irish time folks…..set your reminders!

Please note that this sample pack were provided by Irish Distillers Ltd., free of charge to the author. No monetary reward was received for the review. This review, as with all reviews, was written subjectively and not influenced in anyway.