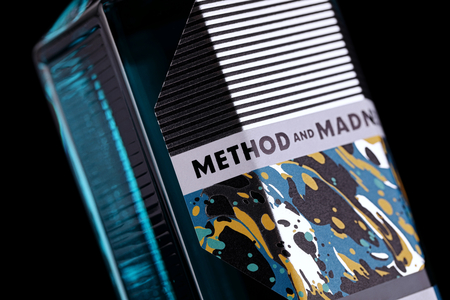 Gin??? Really? On a whiskey blog? Well there is a wee story behind this. Back in June or so of last year I had heard whispers of a Gin being planned in the Midleton Distillery. Dismissed as the ramblings of a madman, I took no notice. Until I toured the micro distillery in August with a group of friends and peaked over a newly erected partition to see what was obviously a Gin still. I’m Irish…..if you try to cover something over I’ll go and have a peak! A quick email to the PR company for Irish Distillers confirmed my suspicions………”no comment” was the gist of the reply and for me, that was all the confirmation I needed! It wasn’t something I needed to break to the world straight away. I prefer surprises myself so it was left and surprisingly, the talk and chatter of the mysterious Gin from Midleton didn’t start until December.

I cant say I’m the biggest fan of Gin myself, its just not my thing. Mrs That’s Dram Good is, however, so I get a “try this” or “try that” at home but I’m no expert. That said I’ll give anything a whirl in the name of research!!!! Full details and press release below.

– THE FIRST RELEASE FROM THE MICRO DISTILLERY, MIDLETON –

Bringing together the experience and expertise of Midleton’s Masters and Apprentices, METHOD AND MADNESS Gin is the result of an exploration into historic gin recipes from 1798, which have been preserved at Midleton Distillery, and months of research into how botanicals work together to create unique flavours in gin.

Overseen by Master Distiller, Brian Nation, and Apprentice Distiller, Henry Donnelly, the gin has been distilled in ‘Mickey’s Belly’*, Ireland’s oldest gin still first commissioned in 1958, at the Micro Distillery, Midleton. The new release benefits from an eclectic fusion of 16 botanicals led by black lemon and Irish gorse flower – imparting notes of citrus and spice with subtle earthy undertones. METHOD AND MADNESS Gin is bottled at 43% ABV and is available in Ireland and Global Travel Retail from March 2019, at the RRP of €50 per 70cl bottle, ahead of a wider release in global markets from July.

To inform the creation of METHOD AND MADNESS Gin, Brian Nation and Henry Donnelly consulted with Irish Distillers Archivist, Carol Quinn, to understand the rich history of gin production in County Cork. In the 18th Century, Cork was a mercantile city and a centre of production for gin and rectified spirits. Merchants such as the Murphy family, who founded Midleton Distillery in 1825, imported a rich variety of spices and botanicals to which distillers had access. In the 1930s, Max Crockett – father of Master Distiller Emeritus, Barry Crockett – created the first commercially produced gin in Ireland, Cork Dry Gin.

A notebook kept in the Midleton Distillery archive dating back to the 1790s, written by a rectifier in Cork called William Coldwell, details the recipes, botanicals and methods that informed the creation of Irish Distillers’ Cork Crimson Gin in 2005. A premium pot still gin, Cork Crimson Gin provided the primary inspiration for Brian and Henry in reimagining the recipe for METHOD AND MADNESS Gin over the past year.

Henry Donnelly, Apprentice Distiller at the Micro Distillery, Midleton, commented: “It has been an incredible journey over the past year in pouring over our historic gin recipes, consulting with our Master Distiller Brian Nation and trialing different recipes in the Micro Distillery to bring METHOD AND MADNESS Gin to life. Midleton and Cork are steeped in gin heritage, so to be able to combine the knowledge and tools of the past with the skills of the present to create a gin for the future has been a real honour.”

Brian Nation, Master Distiller at Midleton Distillery, added: “The release of our METHOD AND MADNESS Gin represents the next chapter in the story of us re-writing what a modern Irish spirits company can be. Through our work with the Apprentices at the Micro Distillery, Midleton, we continue to innovate and experiment with different grains, distillation methods and spirit types and look forward to sharing our creations with the world in the coming years. As a Cork native myself, bringing the spirit of premium Irish gin back to the city has been a personal highlight – and one that I look forward to enjoying being a part of for many years to come.”

Brendan Buckley, Innovation and Specialty Brands Director at Irish Distillers, concluded: “At the very core of METHOD AND MADNESS is a commitment to push the boundaries of what we can achieve in Midleton Distillery, and I believe that taking a confident leap into the modern premium gin category is the very definition of this mindset. Many new producers in Ireland are releasing gins while their whiskeys mature, but we are in no terms late to the party – in true METHOD AND MADNESS style, we are entering the gin market using our passion and unrivalled distilling expertise as our guide.”

First unveiled in February 2017, METHOD AND MADNESS aims to harness the creativity of Midleton’s whiskey masters through the fresh talent of its apprentices. Taking inspiration from the famous Shakespearean quote, ‘Though this be madness, yet there is method in ’t’, METHOD AND MADNESS is designed to reflect a next generation Irish spirit brand with a measure of curiosity and intrigue (MADNESS), while honouring the tradition and expertise grounded in the generations of expertise at the Midleton Distillery (METHOD).

*Mickey’s Belly is named after Michael Hurley, a Distiller at Midleton Distillery for 45 years. Michael Hurley worked in the Vat House at Midleton. He worked for Irish Distillers for 45 years, beginning his career with the Cork Distilleries Company where he was employed as a clerk in the Morrison’s Island Head Office. He then transferred to the watercourse Distillery where he worked for 6 years before coming out to Midleton. A Customs official or ‘Watcher’ named Dickie Cashman gave the still the nickname ‘Mickey’s Belly’ in his honour. It too had come in from Cork to work in Midleton.