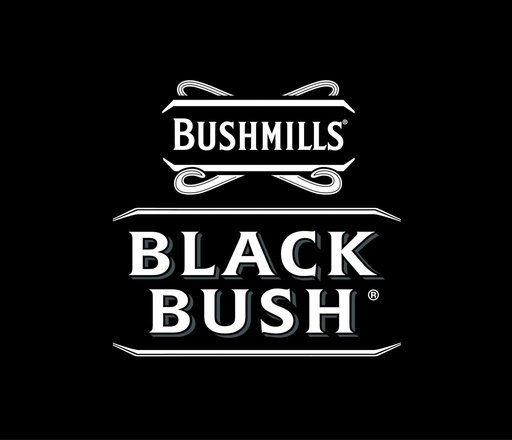 So as some of you will know from social media, I came home from work this week to a wonderful surprise from Bushmills. 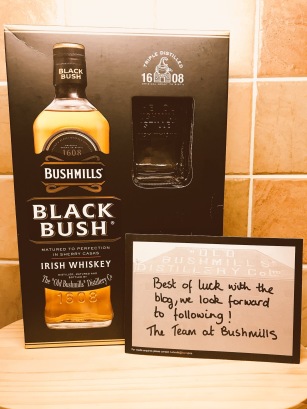 A presentation box of Bushmills Black Bush with two Bushmills glasses. To say I was blown away was an understatement. Contrary to some belief out there, I didn’t start a blog for “free stuff”. But that’s a whole other post which I may just throw together shortly (I just deleted a 10 line rant!!). So to arrive home to the package was truly fantastic, especially due to the fact that it had a nice little note with it and that it was a staple Irish whiskey that I’ve no doubt was sent for me to just simply enjoy. So I said why not give it a quick review!

Black Bush is one of those whiskeys that is remembered through the ages. Jameson, Powers, Paddy and Black Bush are my earliest memories of whiskey on the shelf of my uncle’s pub in Ballybunion. Black Bush evolved from the Bushmills Special Old Liqueur Whiskey which was released in the 1930s. Back then, a lot of people couldn’t read and took to calling for whiskey in a bar by their label. For instance, before Cork Distillers called their whiskey “Paddy”, after Paddy O’Flaherty the salesman, the label had a map of Ireland on it, just like it does today. People who wanted that whiskey usually called for a “map of Ireland” whiskey. For Bushmills Special Old Liqueur Whiskey it was simple. It was a Bushmills whiskey with a black label and hence people started asking for a Black Bush.

Triple distilled and bottled at 40% ABV., the present-day blend contains about 80% Malt matured in ex Oloroso sherry casks and 20% grain whiskey. This ratio makes it more of a malt whiskey than a blend when tasting. Now I must confess……. I do enjoy a sherry influenced whiskey. I hope you do too!

Palate – Light and a little oily. Sweetness from the sherry and grain but not overly sweet. Slight spice with vanilla and some toffee notes.

Finish – A lingering medium, bordering on long. Some Liquorice towards the end.

Overall this is a lovely dram to sit back and sip in the evening. At under €35, it is a real gem of a whiskey. I had almost forgotten how much I liked it with the vast influx of new whiskeys on the market overshadowing it in recent years……but then again, this whiskey has been around for over 80 years and it’s easy to see why. For the price point, it would be hard to beat it. Big thanks again to Bushmills for sending the package. 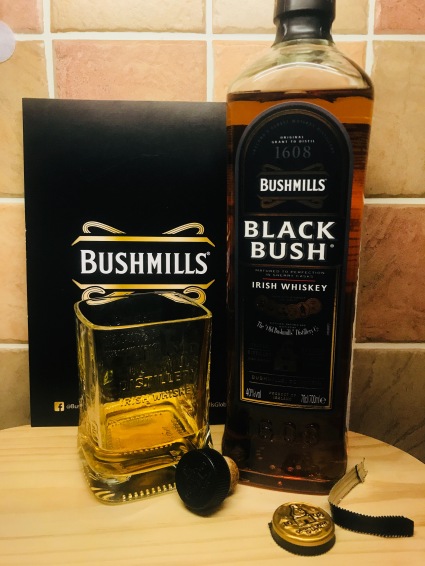 So that’s the whiskey done, but……what about the glasses? So for me savouring whiskey at home is an experience. Its having the drop of water in a nice jug. Sitting back on the chair in front of the fire. Relaxing and having the whiskey in a nice glass. For me, glassware is very important. The swirl, checking out the legs, the nosing, the feel, the thickness of the glass rim……they are all important. Alas, I must say that I was underwhelmed by the Bushmills glasses. Modeled on the bottom of a Bushmills bottle, it is a novel idea which looks great. But for me, personally, I need to swirl the whiskey before nosing it. Hey, maybe it’s just a habit and you’ll all ridicule me from here on in……but that’s just me. Have you ever tried to swirl a liquid in a square glass?? Well let’s just say it doesn’t work out great. My dogs did enjoy the drop or two that landed on the ground (please don’t anyone tell my wife!!). After completing a tasting in the Bushmills glass I reverted to my copita to re taste it just to be sure to be sure……research and all that!! While my notes remained the same, I’m sorry to say that the experience was better. Pretentious or what……