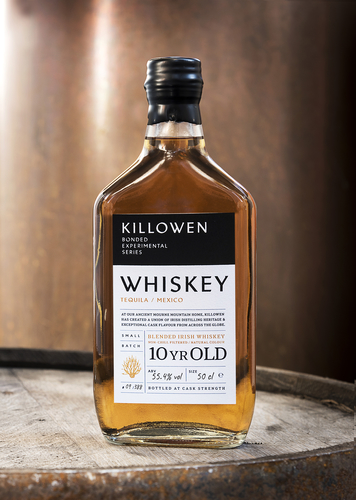 I don’t think its any secret that at Whiskey Live last year, my number one stand was Killowen. In fact, many reading this may have asked me that weekend to recommend where they go next…..the answer was always Killowen. With direct fire stills, worm tubs and outdoor fermenters, Brendan Carthy and the team are doing things traditionally. Their mashbills are seriously interesting, rivaling Willy Wonka’s chocolate factory for variety and innovation. And that really showed in the new make spirit that Brendan and the lads had under the table that weekend.

Killowen is relatively new and while it does not have any of its own spirit that can legally be called whiskey, it does have an impressive variety of new make spirit laid down and maturing. It has released legal Poitin to the masses and, most recently, hand sanatiser! But for a distillery like Killowen to survive, there has to be some revenue stream. Enter the Killowen 10yo Bonded Experimental Series. Made up of sourced whiskey, which Brendan very openly states is sourced from Co. Louth and Co. Antrim, this series sees the whiskey finished in various ways. From a Jamaican Rum finish in batch one to Txakolina Acacia Cask finish in batch two and now another unusual finish in batch 3; Tequila. Bottled at cask strength at 55.4% ABV. in a 50cl bottle, this 10yo is natural colour and non chill filtered. In fact, I wonder is there any filter used as cask chars can be seen floating in the bottle. I LOVE that!! I thought it was important to mention so you don’t think there is anything wrong with the bottle when you purchase!

In line with the transparency advocated by Brendan Carthy, the label shows that this is 75% 2009 grain whiskey, 5% 2008 Malt (distilled in Northern Ireland) and 20% 2008 Malt. Once blended it was left to marry and finish for 10 months in a Tequila Mayorazgo cask. Brendan said during the week “From the outset, the challenge was to push the boundaries of cask finishing as far as possible before the whiskey is overdone. All too often are Irish whiskeys following the same hymn sheet of rich fruity aromas, which we wanted to acknowledge in a different way. Killowen have pushed the relationship of wood and spirit to create a more balanced flavor profile where ripe fruits meet nuts, herbs and earthiness with a tiny kiss of smoke”.

I was lucky enough to have a bottle delivered to me this week and so I got to crack it open last night and took some of my own notes which I will share with you below;

Palate – Surprisingly thin mouth feel. Lemon and lime shines through immediately for me. Homemade lemon and lime at that. Orchard fruits are complimented with some bournville dark chocolate. Almond and raisin notes lead me towards a sherry influence buried in there in one of the casks used. With water a coffee note appears and opens up that sherry influence……it’s there, but only just.

Finish – Long finish on this for me but, unusually, for a second or two it disappeared after the palate only to return with vigour! Slight mouth drying from an oaky spice with loads of cinnamon and nutmeg to tickle your taste buds.

Overall – Firstly I must admit, I don’t drink Tequila. So this is a bit of a learning curve for me, one that will no doubt now necessitate the purchase of a sipping Tequila for me to start identifying the Tequila finish properly. While this isn’t the first Tequila finish In Ireland, The Battalion from JJ Corry has that title, it is certainly unusual for Irish Whiskey and I love that. This is a whiskey that you really can play with. Lovely to drink undiluted and takes to water really really well allowing you to slowly peel back some of the layers.

The Killowen Bonded Experimental Series 10yo Tequila can be purchased from IrishMalts.com here, where you can also read the official tasting notes also.

This sample was provided free of charge to the author. No monetary reward was received for the review. The review, as with all our reviews, was written subjectively and not influenced in anyway.