Irishmalts.com have quickly developed a reputation for fair pricing coupled with consistent top notch customer service and a fantastic delivery service. Shipping to 37 countries and all the US, it delivers a quality service and competition that is needed in the market, particularly for Irish spirits. Founded in late 2017 by Corkonian brothers John and Robert O’Donovan, the site has already released some exclusives along with having first release rights of some bottles to all markets. Growing in popularity from month to month, they are positioned to become a major supplier of Irish whiskey worldwide in time to come. I have often referenced irishmalts.com in my reviews simply because of their great service and very competitive prices. I should say now that I am not involved in the company in anyway but I have been fortunate to have been given exclusive news from time to time along with early access to purchase bottles. Win win for us all (ye included!!). The boyos have some great ideas for the future and as they grow, so too will their catalogue of stock. Make sure to check in regularly and often!

So with all this in mind their latest two releases have now hit the shelves!! Both are brand new Dingle whiskeys. The first, a Founding Fathers bottling called “Old Cannon”, is a cask strength offering bottled at 59.8% and is fully matured in a Bourbon cask. This cask, number 227, yielded 240 bottles with 220 going on general release. Yesterday I spoke with the owner and asked why he called his bottling Old Cannon. “Up to the early 1900’s Irish Whiskey dominated the world stage. Then a perfect storm of politics, technology and prohibition decimated the industry. However, someone forgot to tell the distillers on the island who continued to distill illegally. Legend has it that an old cannon, rescued from a Spanish shipwreck was used to warn islanders that the ‘police’ were on a raid. Young children would run from farm to farm shouting ‘cannon, cannon!!’, a code word for a raid by the authorities.” Asking why he decided to get behind Dingle at an early stage he said “I love whiskey and when I saw the opportunity to contribute to the industry in Ireland and become a founding father, I jumped at it”.

The spirit for Old Cannon was filled into an ex-bourbon cask, by the owner, on the 19th February 2014 and was bottled in September 2019, a maturation of 5.5 years. So whats the best part of the Old Cannon release?? The price. Breaking the trend of seriously high pricing, this is priced seriously well at €149.95!!!! And just because that wasn’t good enough Irish Malts are also throwing in free shipping to Ireland and the UK if you enter the code “OLDCANNON” into the promo box!! Speaking to John O’Donovan this morning I asked why they priced Old Cannon at what is essentially a Single Cask whiskey for the same price as the standard married Dingle Cask Strength releases. “We worked closely with the cask owner on advising a price tag for this wonderful release. Dingle have played their important part in bringing the Irish whiskey category to where it is today. This whiskey deserves to be consumed and such, we advised on a price that we believe delivers fairness to the liquid, the brand and the consumer. We are proud to bring such a liquid to the market.”. The Old Cannon Dingle Founding Fathers release is available to buy from now here.

Nose – Is this really cask strength? Not even a hint of high alcohol content. A sweet yet malty nose. No rawness like previous Dingle releases. Slight hint of marmalade and some hazelnut hiding in the back.

Palate – Oily mouth coating with malty cereal at first that is quickly thrown aside and replaced by a caramel sweetness. A lovely rose and lavender not right towards the end. No heat here.

Finish – The finish lingers and lingers and lingers. The malty cereal notes have disappeared with a sudden burst of heat that leaves a beautiful prickly clove spice which once again is thrown aside by a mellow sweetness carrying right to the end.

Overall – I have found the best bourbon cask Dingle so far, and I love it. This is extremely drinkable. Absolutely no alcohol burn on the nose. No burn in the chest while drinking it. Just enough heat in the mouth. For me, this is a very balanced whiskey and outside of the super Sherry casks such as “The Palace” and “Beau Rose”, its the one I’ll be buying a second bottle of straight away!

The second Dingle release is two Sons and Daughters casks, numbers 2419 and 2420. These 25 litre casks are specially ordered casks for the Dingle distillery. Arriving as Virgin European oak they were heavily charred and seasoned three times with Dingle sing malt in order to balance the flavours from what can be, overly influential  virgin oak. In December 2015 the casks were then filled with Dingles Single Malt new make spirit and left to sleep until August 2019 when they were disgorged and bottled at 46.5% ABV. Only 15 bottles from each cask are making their way to retail and unfortunately for collectors, it is not a personalised label. But for those of us who are drinkers, you’ll be happy to know these single cask bottlings are coming in at €129.95. That’s a far stretch from what other Sons and Daughters bottles are making. 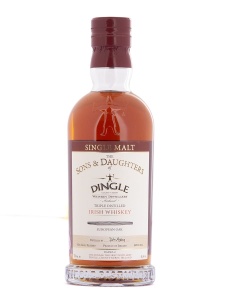 There are no tasting notes available but those 3.5 years in such a small cask will have a profound effect on the spirit making it seem to be a much older whiskey on the palate. Most definitely a drinkers whiskey. The casks are split for sale with cask 2419 listed for sale here, and cask 2420 listed for sale here. 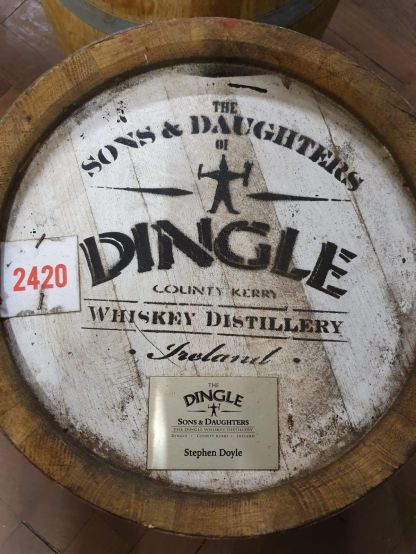