November is one of my favorite months of the year. I always think that Christmas decorations are going up too early so its not the Christmas feeling that does it for me, its the whiskey factor. Apart from Whiskey Live each year November hails some great releases on our little isle and this year is no different. Garavans Powers Single Cask, Red Spot, Sonny Malloy’s Redbreast Single Cask, The Sexton Whiskey and now, The Palace Bars own Redbreast Single Cask!! What a month it has been and we haven’t even got to Whiskey Live 2018 yet!!!! Launching this evening, The Palace Bars Single Cask Redbreast is 17 years old from cask 18831 and bottled at a whopping 59.7%. We were kindly invited to attend but alas we couldn’t make it. I hope to get in next Saturday to give it a try so I hope to have some tasting notes up next week. If you’re interested in trying it yourself, it’s on sale in the bar for €25 a measure from tonight, with a bottle setting you back €350. In the meantime, have a read of the press release below! 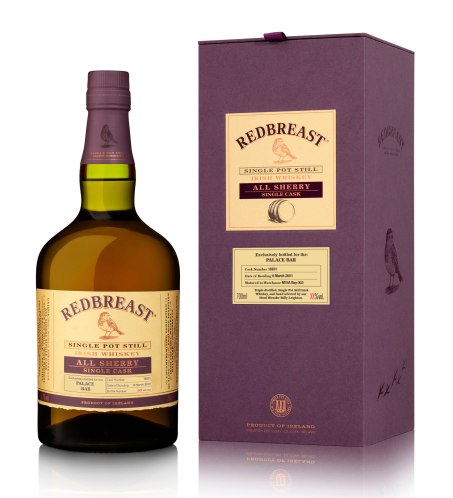 The perfect place to enjoy Redbreast 17 Year Old Single Cask, the Palace Bar is famed for its collection of almost 300 Irish whiskeys, from the very rare bottles housed behind closed cabinets, to the complex, full-bodied and lavishly generous whiskey that is Redbreast. The Palace was established in 1823 and remains one of the city’s finest untainted, unspoilt and unperturbed original Victorian pubs. The décor is the same as greeted customers over 190 years ago, and it is this deference to craft, character and atmosphere that gives the Palace Bar its unique place in Irish history. Today, the Palace Bar is run by Liam Aherne and his son, Willie, who have managed it since 1946.

Redbreast Irish Whiskey was originally crafted and sold by W&A Gilbey, one of Dublin’s finest whiskey bonders dating back to 1857 – so the release of Redbreast 17 Year Old Single Cask pays homage to 19th century Dublin. Highly anticipated by Irish whiskey aficionados, Redbreast 17 Year Old Single Cask was hand-picked by Midleton Distillery’s Master Blender, Billy Leighton, exclusively for the Palace Bar. Laid down to mature in a first-fill ex-Sherry cask, the liquid reveals initial sweet notes of raisins and dates, reminiscent of the Oloroso sherry wine, which work seamlessly with the pot still spices for balance. The notes of toasted Spanish Oak further add to the complexity.

Redbreast 17 Year Old Single Cask begins with a smooth mouthfeel, and then exposes mild nuttiness and dried fruit character. As the tannins evolve, slightly drier notes come to the fore, along with roasted coffee beans and dark chocolate. The pot still spices linger, while the sweet fruit character fades, leaving the oak tannins continuing to the end.
Commenting on this new addition to the Palace Bar, Willie Aherne, said: ‘While we preserve and respect tradition at the Palace Bar, we also warmly welcome in the new, and we are delighted to be able to offer our customers Redbreast 17 Year Old Single Cask. Created at Midleton Distillery, which has preserved the pot still tradition in Ireland for almost 200 years, this is the coming together of two great houses that have such a strong history and heritage. We know our customers will enjoy and savour drinking Redbreast 17 Year Old Single Cask at the Palace.’

One thought on “The Palace Bar Redbreast Single Cask”