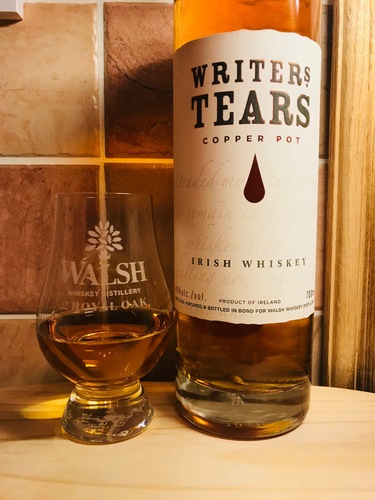 Nestled within the barley fields of Royal Oak County Carlow sits the beautiful and picturesque Walsh Distillery. Owned by Bernard and Rosemary Walsh, the distilleries company started in 1999 making Irish coffees in a ski chalet in France and returned to Ireland in 2001 to launch their Irishman Irish Cream Liqueur. It wasn’t long until Walsh turned their sights on something bigger and bolder and in 2006 they signed a long-term supply agreement with Irish Distillers Ltd. One short year later, in 2007, The Irishman Whiskey was born! With the international success of The Irishman, a second brand soon followed and in 2009 Writers Tears was launched. With a unique whiskey recipe of 60% single Malt and 40% Single Pot Still, it was an instant success. Construction of the Walsh Distillery started in 2014 and on Easter Sunday 2016, the stills at Walsh distillery were commissioned by the distillation of their first new make malt spirit.

So there you have the history. I myself find that the Irishman, particularly the Founders Reserve, and the Writers Tears variations, to be seriously under rated in Ireland. Founders Reserve is one of the best value:quality ratio whiskeys on the market. Writers Tears Copper Pot is also in that bracket. At €45 it is a very affordable, high quality whiskey. Obviously the Single Pot Still component comes from Midleton and I would assume that the Malt comes from Bushmills. 40% ABV. and chill filtered, it works very well at this strength. You can, of course, buy the cask strength version if you desire a higher ABV (might try to review that soon too!).

Nose – Sweet with a nice bit of vanilla and honey. Toffee and butterscotch making an appearance with some spice in there too.

Palate – Richness as suggested from the nose continues with creamy toffee and caramel. Green apples jump around in there too

Finish – Medium to long. Sweetness remains but with a gentle burst of spice that leads the finish to fade off with a  slight citrus note.

Overall – This really is a fantastic whiskey. Price is good. Taste is great. Writers Tears wont offend many palates and is a nice easy drinker that could be used to convert the masses to Irish whiskey.