I always remember the trips to Dublin with my mother when I was a child to visit my aunt and cousin. The hussle and bussle of the big smoke was a completely different pace of life from rural North Kerry. Several memories stand out but the day my aunt took me over the Ha’penny bridge stands out as much as the trip to the zoo (The zoo…..fancy or what!). Of course the ever inquisitive child that I was asked why it was called the Ha’penny bridge……now I’d love to be able to sit here tell you she told me it’s history. How it came about to being built alone with ins and outs of it’s construction……. but she didn’t. She hadn’t a clue why it was called that. And now several years later as I sit down to review it’s whiskey namesake, a little bit of research tells me all I need to know about one of Dublin’s most iconic landmarks. Built privately in 1816, it replaced 7 ferries that operated on the Liffey transporting people back and forth and at the time, they charged a Ha’penny (half a penny) to cross the pedestrian bridge. Ya, it’s that simple. No massive history lesson today folks!

Ha’penny Whiskey under went a “soft launch back in June/July this year. No big fanfare, it just arrived on shelves. If you haven’t heard of Ha’penny Whiskey before now, I bet you have heard of Pearse Irish Whiskey! These are one and the same and it’s release increases the Pearse portfolio to 7 whiskeys. It is also the first outing for Conor Ryan, their Global Whiskey Ambassador, as a whiskey blender! That’s right, Conor himself blended this bottling from four casks using 38% Pearse Malt and a sourced grain for the remaining 62%. The whiskey itself is non age statement but I’m reliably informed that it contains whiskey that is between 4 and 10 years old. The four casks that are married together make an interesting line up. A ruby Port pipe finished malt, a first fill bourbon malt (Town Branch barrels), an Oloroso Sherry grain and a double charred bourbon barrel for the remaining grain element. Like all Pearse whiskeys it is non-chill filtered and bottled at 43% ABV. at natural colour. The RRP is under €50. So, what do we think?

Nose – Sweet. Slight nuttiness and spice. Dark Chocolate, some dried fruits and a touch of caramel.

Palate – Light but oily mouth coating. Malt and earthiness with some dried fruits such as figs and apricots. Bit of brown sugar in there too bringing the sweetness up.

Finish – Big hit of oak that arrives out of nowhere and leaves a lovely spicey tingle all over the mouth, Slightly drying. No burn. Touch of orange zest at the end.

Overall – I would hazard a guess that the Port element is the smallest of the four casks in the blend, then the Sherry, followed by the first fill bourbon and then the double char grain being the highest component. But that’s an outright guess. For an under €50 blend this is really good. It’s again distinctly Pearse, just like most of their line up. I’m fairly certain in a blind taste test I would be able to pick it out (yes yes, maybe we should try that). It’s an easy drinker that will not offend anyone’s palate. Watch this space……we may have a little competition coming up tomorrow…… 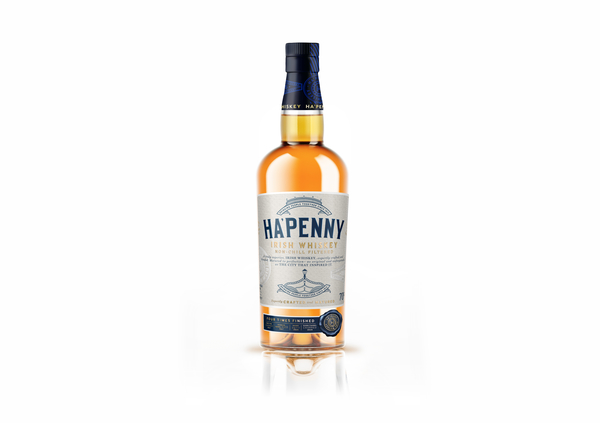 This sample was provided free of charge to the author. No monetary reward was received for the review. The review, as with all reviews, was written subjectively and not influenced in anyway.

One thought on “Ha’penny Irish Whiskey”